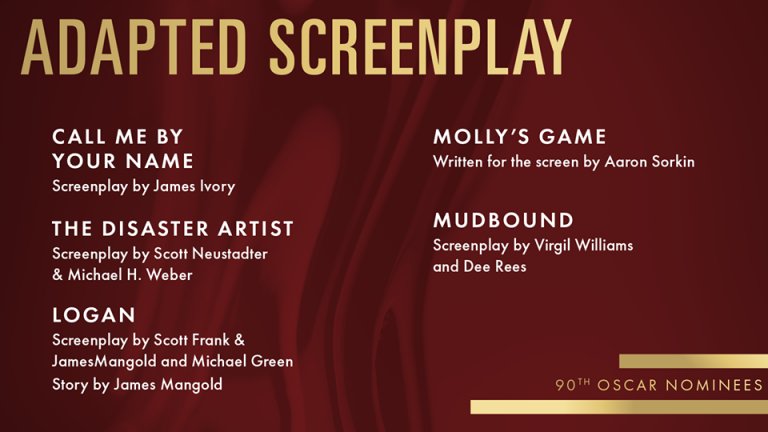 What Movies Only Earned an Adapted Screenplay Oscar Nomination in 2017? 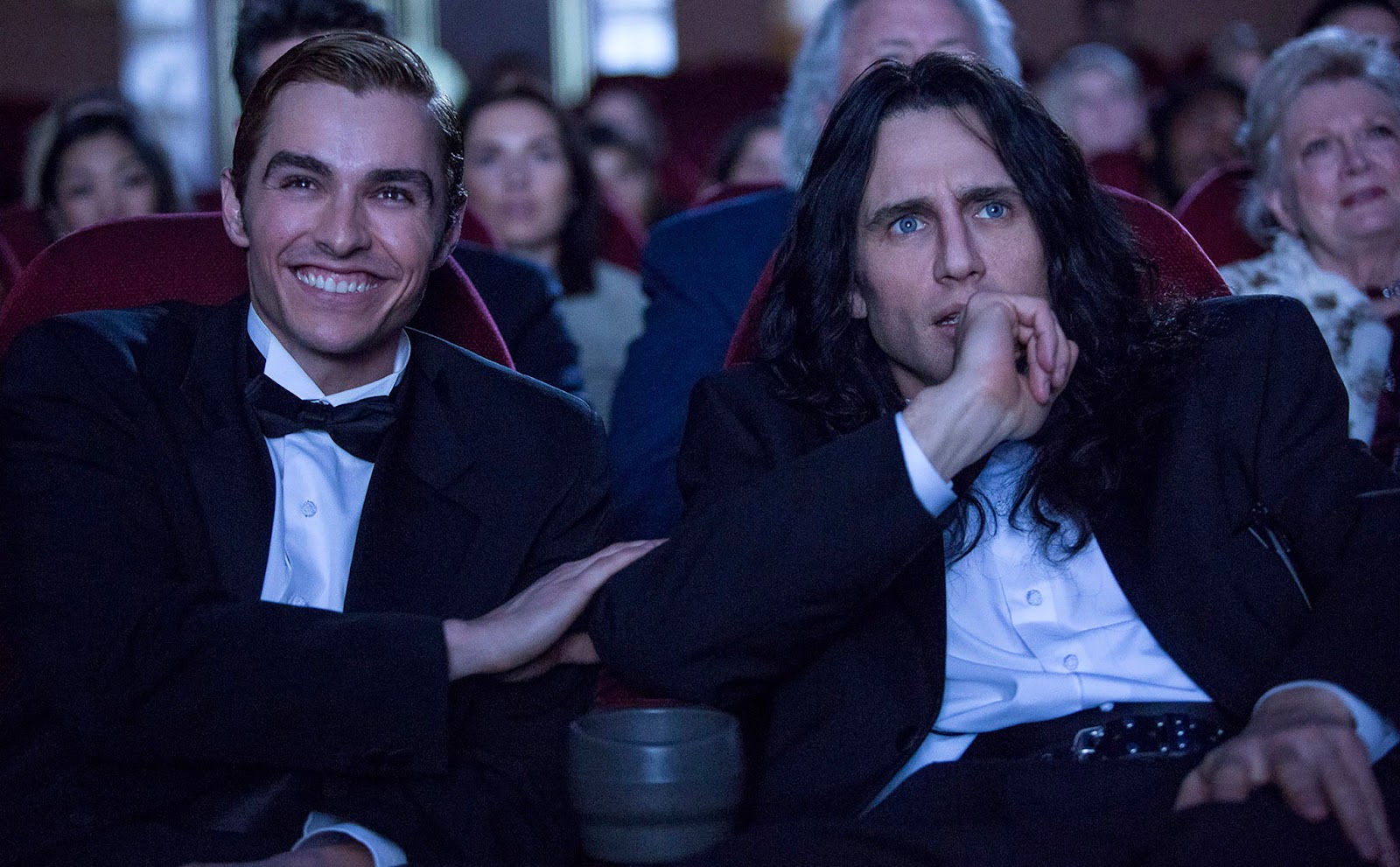 What Are ‘The Disaster Artist,’ ‘Logan,’ and ‘Molly’s Game’ About?

These three “lone screenplay” nominees have very little in common besides this Oscar designation.

Aaron Sorkin’s Molly’s Game delves into the world of high stakes poker. After a fateful accident, Olympic-bound skier Molly Bloom (Jessica Chastain) makes a big pivot into organizing poker games. Soon, she is running a large high stakes poker ring that’s home to actors, celebrities and some of the richest people in the world. All gambling schemes have an expiration date on them though. Molly’s triumphs in the poker world are all framed as flashbacks during her large legal battles, where she must learn to trust her straight laced attorney (Idris Elba).

If there’s any connective tissue between films, one could see the eccentric (and strangely rich) Tommy Wiseau pop into one of Molly’s poker matches. The Disaster Artist tells a very different true story set in early 2000s Los Angeles. Aspiring actor Greg Sestero (Dave Franco) moves to LA with big dreams, but little way of making them happen. He then becomes friends with a mysterious stranger, Tommy Wiseau (James Franco), who enlists him to help make his movie. So begins the saga of the making of The Room, a 2003 cult classic that has been a staple of midnight screenings for a decade.

Finally, the most popular of the bunch was undoubtedly Logan. This standalone chapter in the X-Men saga focuses squarely on Wolverine (Hugh Jackman) down on his luck. In a future where mutants are nearly extinct, Wolverine is drinking himself to death and becoming less able to heal his literal wounds. He gets a newfound sense of purpose when Professor X (Patrick Stewart) entrusts him with transporting a young new mutant, Laura (Dafne Keen), to safety. 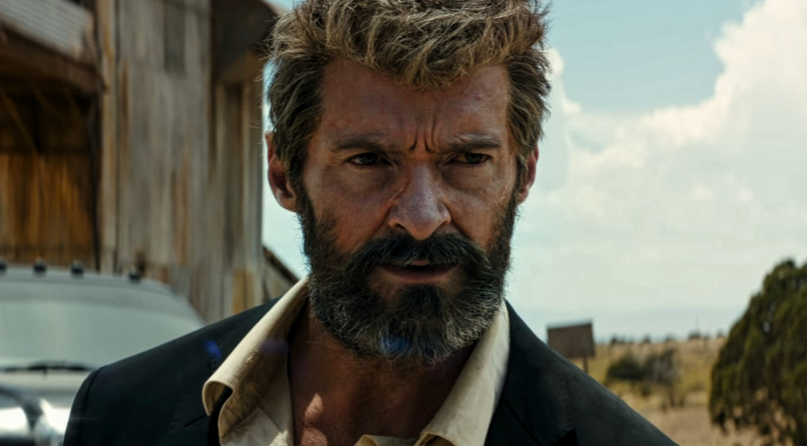 How Did ‘The Disaster Artist,’ ‘Logan,’ and ‘Molly’s Game’ Earn Their Adapted Screenplay Nomination?

It is exceedingly rare for there to be three lone screenplay nominees in the same category. The last time that feat happened was for Best Original Screenplay in 1990 (Alice, Green Card, Metropolitan). Usually the Best Picture race fills up with adaptations. However, the 2017 season was strange because eight of the nine Best Picture nominees were original screenplays. With so many open slots, the Academy was forced to be creative.

Aaron Sorkin had never been nominated for an Oscar until he won for The Social Network. Once you win an Oscar, you’re forever on their radar, meaning your films will usually be at least “considered.” Thus, when he made his directorial debut with Molly’s Game, he was always assumed to show up in the Adapted Screenplay category. Corresponding nominations at all the major precursors (Golden Globes, Critics Choice, WGA and BAFTA) all but solidified this as a nominee.

With major buzz in Best Actor (we’ll get to that in a second), The Disaster Artist was a strong contender for the fourth slot in the category. Being a movie about filmmaking and Hollywood only helped. Writers Scott Neustadter & Michael H. Weber had come close in this category before for (500) Days of Summer and The Spectacular Now. With less “prestige-y” competition, it was finally time for Oscar to reward the writing duo.

The biggest surprise was Logan, which became the first superhero film nominated in the writing category. There was no precedent for it happening. Yet, the thinned out field and wide acclaim for the film helped it out in making history. The Wolverine solo outing also was deliberately outside of the traditional “superhero” genre, borrowing a lot from an old Academy favorite: the western. This, plus an all-important WGA nomination, helped Logan break into the Oscar race. 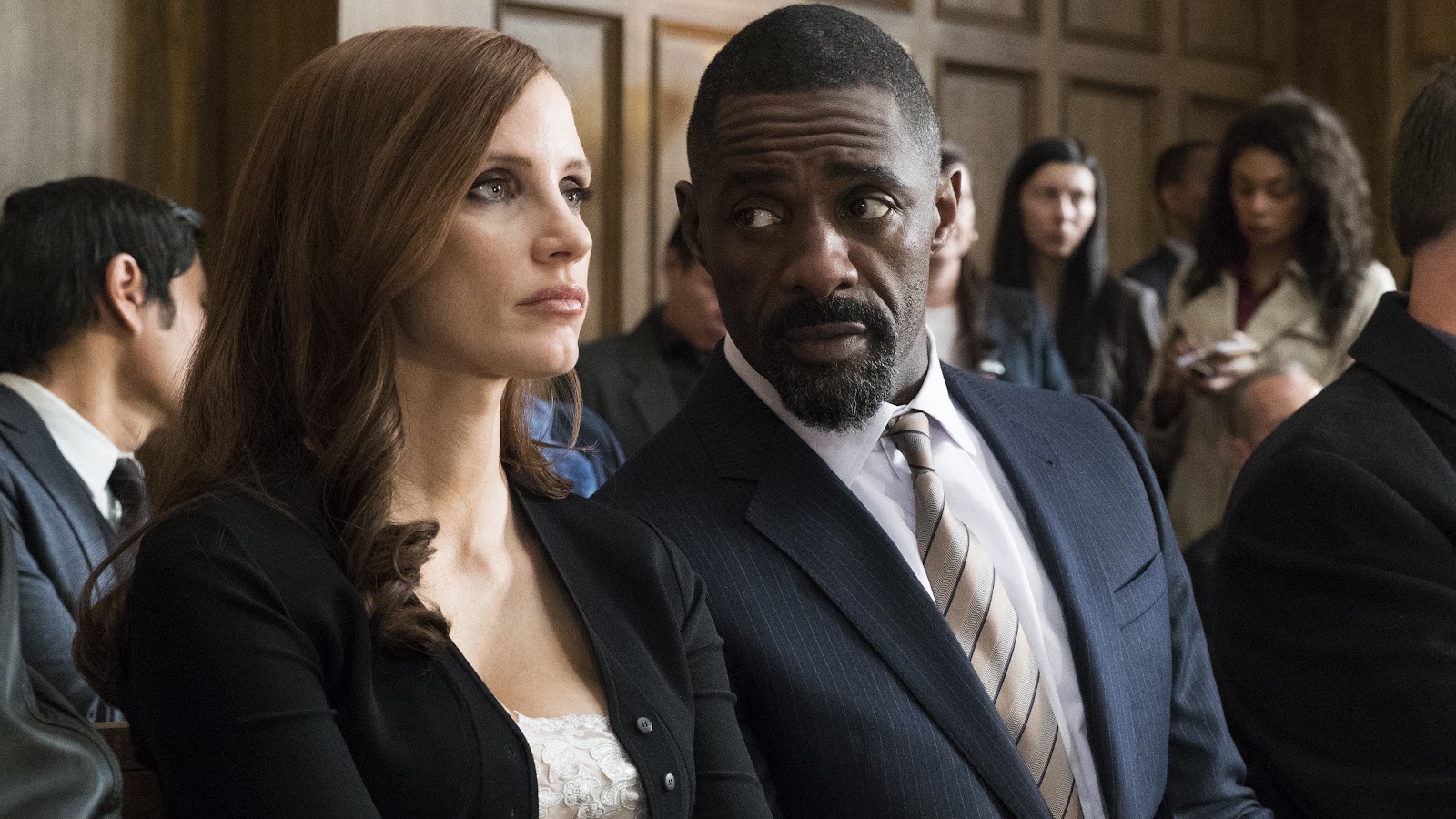 What Other Categories Should They Have Showed Up In?

Of the three films, only Molly’s Game was in the hunt for Best Picture. Aaron Sorkin’s fast paced true story kept showing up at the guilds, with nominations from the PGA, DGA (First Feature), WGA, and ACE. While some films can get into Picture with only one other nomination (such as Selma or A Serious Man), it’s not incredibly likely. Jessica Chastain was a strong possibility in Best Actress. However, her miss at the SAG awards during a competitive race kept her from the Oscar lineup. Much like the film, this was Sorkin’s show.

The most likely of these three films to break out from the “lone nominee” status was The Disaster Artist. James Franco’s performance as Tommy Wiseau was a major player in the Best Actor field. He was a favorite among critics groups, won the Golden Globe and saw SAG and Critics Choice nominations for his performance. His chances began to fall as accusations were cast against him during the rise of the #metoo movement.

It’s strange that the biggest budget film of the lot had the least amount of major precursors. Even among the craft guilds, it was only recognized by the Art Director’s Guild and Motion Picture Sound Editors guild. While Cinematography would’ve been a tough category to crack, it would’ve been great to see John Mathieson’s warm, yet bleak, work rewarded. Additionally, the makeup in the movie was fantastic, really letting us feel every year and every wound on Wolverine’s body. It would’ve been my winner of that category and it’s shocking the Academy didn’t take note. Of the core trio, Patrick Stewart was the only one to get a major acting nomination (Best Supporting Actor from Critics Choice). However, I would’ve loved to see Hugh Jackman and Dafne Keen get more serious traction in Actor and Supporting Actress respectively. 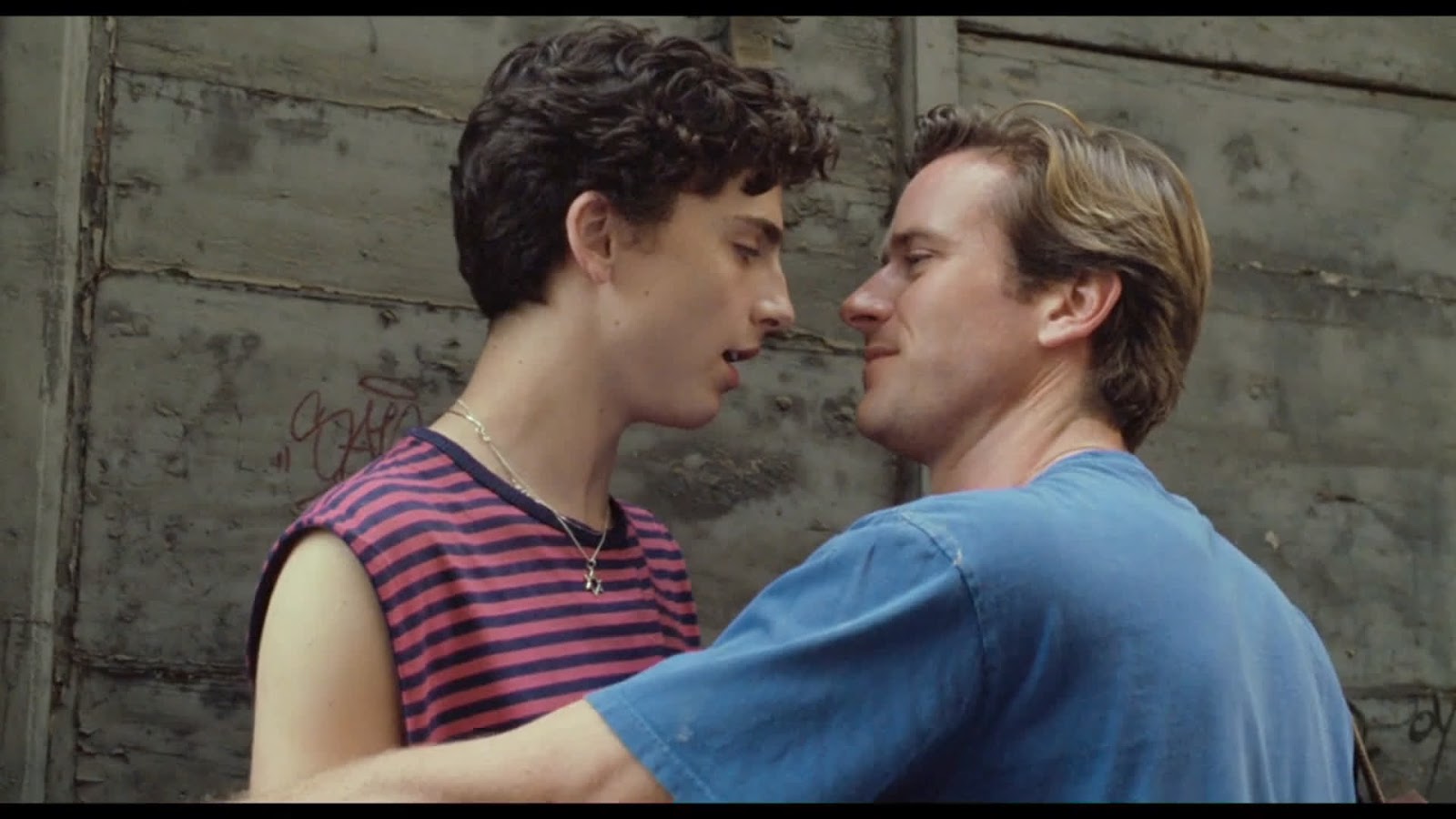 The lone Best Picture of the bunch, Call Me By Your Name, rightfully won the Oscar. Writer James Ivory became the oldest winner in the history of the writing categories. It was a very fitting win for the legendary gay filmmaker, who had a prolific career with his partner, Ismail Merchant, during the 80s and 90s. Awards narrative aside, Call Me By Your Name stands the test of time (4 years) and still deserves the prize. Ivory and director Luca Guadagnino capture the emotional tenor of coming into one’s own sexuality. The incredible monologue by Michael Stuhlbarg alone makes this a deserving win.

Elsewhere, Mudbound became Netflix’s first narrative success in the Oscar race. The sprawling drama of two farming families of different races was incredibly dynamic thanks to the script by Virgil Williams and Dee Rees. It manages to weave in so many different combinations of the relationships between the two families, building to a harrowing finale. Not only does it deserve its place in this screenplay lineup, it also should have made it into Best Picture.

Of the three lone screenplay nominees, Logan has held up the best, despite likely being #5 in voting. The writing team took a well known character and adapted his persona to fit the confines of a western. Giving us a hard-R look at Wolverine was a risky move that paid off. For a series that has lasted over 20 years, Logan stands as a high watermark for the X-Men franchise and for superhero movies in general.

The Disaster Artist also contorts the image of a well known character, though this character walks among us. The legendary/infamous director Tommy Wiseau is given a biopic of sorts as The Disaster Artist chronicles the making of the cult classic The Room. Scott Neustadter & Michael H. Weber’s script showcases new layers to Wiseau’s eccentricities, without ever sanding away his prickly and off-putting behavior. Through their script, Neustader and Weber transform this “making-of” movie into an inspiring tale of embracing one’s own vision, no matter how goofy or flawed it may be.

If there’s any nominee that feels a bit out-of-place here, it would be Sorkin’s Molly’s Game. The film moves at an incredibly fast rhythm thanks to Sorkin’s gift as a writer. This works well within the high stakes poker world, which is where the movie is at its strongest. However, when it comes to the human drama of it all, Sorkin’s script takes a tumble. From the opening monologue about “the stick” to Kevin Costner’s third-act reveal, there are one too many ham-fisted emotional beats. Molly’s Game is a great ride that has trouble sticking its landing, and that largely is the fault of Sorkin’s direction and script.

What a year! What a category! Without having many traditional Oscar-bait options, the writers branch had to look in interesting places to fill out the lineup. Logan became the first superhero movie to be nominated in a writing category. A film about Tommy Wiseau cracked the category. It’s an interesting field filled with great choices. Even if Molly’s Game feels like it was grandfathered in due to Sorkin love, one would be hard pressed to dislike this lineup. Overall, great work from the Oscars.

What are your thoughts on the 2017 Adapted Screenplay race? Let us know in the comments below.

Great article. I agree it was a great year, in general and for this category. Call Me By Your Name and Logan just miss for me. They are 6 and 7 for me and it’s a pretty big gap between them and my number 8. My five were All the Money in the World, Disaster Artist, Hostiles, Molly’s Game and Mudbound. Mudbound would win for me barely over the Disaster Artist followed by Hostiles, Mollys Game and then All the Money in the World which barely makes it over Call Me By Your Name and Logan. But all 7 would make it for me if they were in most years.