Composer and conductor Jeremy Turner is known for creating innovative and diverse music for the moving image and the stage. He is a two time EMMY® nominee, has won the Music + Sound Award, the International Documentary Association Award, the AICP Award, and has been listed in NPR Music’s Favorite Songs of the Year. Jeremy has scored multiple projects for Disney+, HBO, Netflix, and Hulu. We talked to Jeremy about scoring the theme for Disney+’s Marvel’s 616, his work on the Netflix docuseries Immigration Nation and about his writing process.

Thank you for taking the time to speak with me. You’ve been doing this for a little while now, but I feel like a lot of your success has been in recent years.

Yeah, it’s kind of a snowball thing. I fully made the commitment to becoming a composer almost ten years ago, but there was a couple of years there where I was still performing and kind of wearing a couple of different hats. But I’ve been exclusively composing for five or six years.

I’d like to touch on the Marvel 616 theme, which is very Marvel.

The MCU has a lot of iconic themes from composers like Alan Silvestri and Michael Giacchino. Were you given any kind of direction as far as staying in that wheelhouse?

No, nothing. We had kind of a kickoff call with the creators of the show and the main title designer, who was over in Australia, and he’s done incredible work. He’s also won a ton of Emmys for his work. I had a couple of questions like what is the what’s it going to look like, so we had a brief conversation about how we wanted it to look and feel and then ultimately sound. But I kind of had a blank canvas. I certainly took to heart and thought about all the troves of scores that came before this. There’s been a very rich and diverse musical background for Marvel, but there’s also this kind of through-line of this triumphant, brass fanfare, heroic superhero themes that we’ve all become accustomed to. So, for me, it was being aware of what the fans have already been used to and where it’s coming from, but then trying to add my own flavor to it.

Much of your work has been in the documentary or docuseries genre.

Yeah, lately it has been.

At least from a kickoff perspective, the overall approach, at least for me, is not any different. It’s still characters and it’s still stories, and you’re helping support that in the best way you can with music. Taking into account too that you’re also going to have some talking heads or some explanatory stuff, so you have to be careful how dense the music gets at times. But you’d have that same problem in a narrative. Picking your entries and exits and what deserves to have a score and what doesn’t is pretty much the same process you’d have for any project. I think where it can get a little bit more persona, in particular with subject matter like in Immigration Nation, is what you’re seeing on screen is real. These are real deaths, real tragedy, real heartache. and you’re not always going to have that in a narrative show. You can have incredible acting performances and it could even be something that’s based on a true story, but when you’re doing a documentary like that, those are the people like that just lost their son, or whatever the case is, it emotionally, cuts to the vein pretty quickly.

Most, if not all, documentaries and docuseries like Immigration Nation have a viewpoint, despite their ‘fly on the wall’ nature, and the score contributes to that. Do you think that’s more so in a documentary than in a narrative, which is already has a pre-established story?

I think it always depends on the story and the subject matter. I think when it comes to Immigration Nation, I didn’t want to add to what was already on screen. Sometimes in a narrative, the director might tell you, “We didn’t get the shot we wanted,” or “We didn’t get the performance exactly how we wanted, so I’m really going to need the score to help carry it”. It’s a little bit different than a documentary. But it does depend on the point of view, and it depends on the directors and the storytellers. For Immigration Nation, for Shaul [Schwarz] and Christina [Clusiau], the directors of that series, their style is kind of it’s a lot fewer talking hands, it’s a lot more verité. It’s more, “We’re just going to show you everything and you can decide what you want.” It’s not as slighted as some other documentaries are, where they really are kind of forcing you to see it the way they want you to see it. If you’re dealing with a family that’s been separated and you’re dealing with an emotional subject matter, you don’t need to make it even more emotional, because it’s already there on screen. So, sometimes it’s finding the simplest way to just help the audience understand and augment it, just a touch. And then there are other times when you need to put the hammer down and really give some lift to it.

Are you still creating motifs for specific characters and specific scenes?

It was tricky for Immigration Nation because there are just so many characters.

Each episode dealt with so many different things. You’re in New York one moment, and in another episode, you’re dealing with a Ugandan family, and you’re with the Marines dealing with the border crisis in another episode, so everything’s different. I think it would get a little bit long-winded if you really tried to create motifs for each character like Wagner, like, try and do right here, each for each character. Instead of assigning themes or motif to specific characters, we did kind of end up making a human theme; this is the toll, and this is the cost. Sometimes it was the actual notes, and sometimes it was the tones or instruments or orchestration that did that. It could be percussion and synthesizers when things aren’t going well, and then there are a few bright moments where shift to more organic instruments for the human connection.

Speaking of instruments, you play many different instruments. Is there any one specific one that you like to write the write on?

Do you find that your writing process changes from project to project, if you’re writing for your band, Low City, or if you’re working on a film score, or does or stay pretty consistent?

The process changes a little bit based on the direction of the music. I wrote for an Aaron Hernandez documentary series last year on Netflix, and that was very, very heavy, synth-driven, and honestly, you could take a lot of those cues and put them in a sci film, and it would probably work just fine. So, that process was different. If it’s orchestral, I can kind of just sit down and get right to work, whereas if I’m starting to explore new instruments or new synths or trying to tweak a modular synth to get it just the right place that needs to be and not get off track, then yeah, it’s a little bit of a slower process. Every project is different, but you’re still sitting down and watching the and finding the tempo and feeling the tone and then doing your thing.

You work in a variety of different types of music. Do you find anyone in particular that best represents your voice as a composer?

The orchestra is always the closest thing to my heart since that’s how I came up. It’s the language I understand the most, and whether it’s orchestrating or conducting, or just the mechanics of how an orchestra works. I love that, that is hundreds of years old, and it’s only changed marginally. That’s probably the that’s my biggest comfort zone. 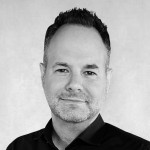