What Movie Only Earned a Screenplay Oscar Nomination? What Is ‘Knives Out’ About?

Legendary crime novelist Harlan Thrombey (Christopher Plummer) is found dead on his 85th birthday. Was it a natural death, or was there foul play involved? Detective Benoit Blanc (Daniel Craig) is on the case, alongside police lieutenant Elliott (LaKeith Stanfield). Every member of the Thrombey family (each more horrible than the last) was present the evening of his death and possessed motive to kill off Harlan to gain fortune. However, the key to the mystery may lie in the hands of Marta Cabrera (Ana de Armas), Harlan’s caretaker and confidant.

How Did ‘Knives Out’ Earn Its Original Screenplay Nomination?

Knives Out is delicious, infectious fun. Rian Johnson’s whodunnit was beloved by critics and audiences alike (97% Rotten Tomatoes critics, 92% Rotten Tomatoes audience score, $165 million domestic gross). When a movie is a hit of that magnitude, especially around the Thanksgiving/Holiday season, it’s hard for Oscar to ignore. We’ll delve into the precursor success of the film in a later section. However, it became pretty clear early on its best shot was in the original screenplay category. By the end of the season, it earned screenplay nominations at the WGA Awards, Critics Choice Awards and BAFTA Awards. This helped secure it within the Oscar race.

Box office and precursor traction aside, the screenplay is also unimpeachably good. Johnson smartly centers the ensemble comedy around Marta as an entry point. Since we spend the most time from her perspective, we’re given enough space to laugh at each of the broadly rendered members of the Thrombey family. Rather than paint each one of them as caricatures, Johnson carves out detailed eccentricities and motivations for each character. Don Johnson and Jamie Lee Curtis get to play into the power and money hungry Republican elite with their characters, Richard and Linda Drysdale. Toni Collete is an absolute hoot as a lifestyle guru tenuously connected by law to the family. Meanwhile, Katherine Langford exposes the hollowness of white feminism as granddaughter Meg. Each character adds texture to Johnson’s larger view of how familial wealth corrupts later generations.

While each member of the Thrombey family could easily command the spotlight, Johnson makes Marta just as compelling a figure. She believes that she has killed Harlan due to mixed up medicines (the truth is much more than it initially seems). If that didn’t make the situation stressful enough, Marta also uncontrollably vomits when forced to tell a lie. This makes her the perfect pawn for the most eccentric character in Johnson’s arsenal, Detective Benoit Blanc. Johnson writes Blanc in such a gregarious fashion that it gives an actor like Daniel Craig plenty of moments to make an iconic stamp. Between the garish accent and Poirot-like monologues, Blanc is an old-fashioned detective wonder that we can’t wait to see more of.

Good characters alone don’t make a good screenplay. One needs a sturdy and engaging plot. Luckily, Johnson writes an air tight mystery that only gets better upon repeat viewings. Every reveal and double cross feels beautifully choreographed, as if each character is a thread in a beautifully embroidered quilt. This is most true in the way Johnson writes Ransom (Chris Evans), the bad boy of the family who continues to surprise everyone around him. It could be so easy to write Ransom as a free agent that morphs in whatever way the script needs to tie up loose ends. However, Johnson manages to make every moment between Ransom and his co-stars feel authentic. He, like every character, is acting with consistent agency, even if his motives aren’t always clear to the audience. 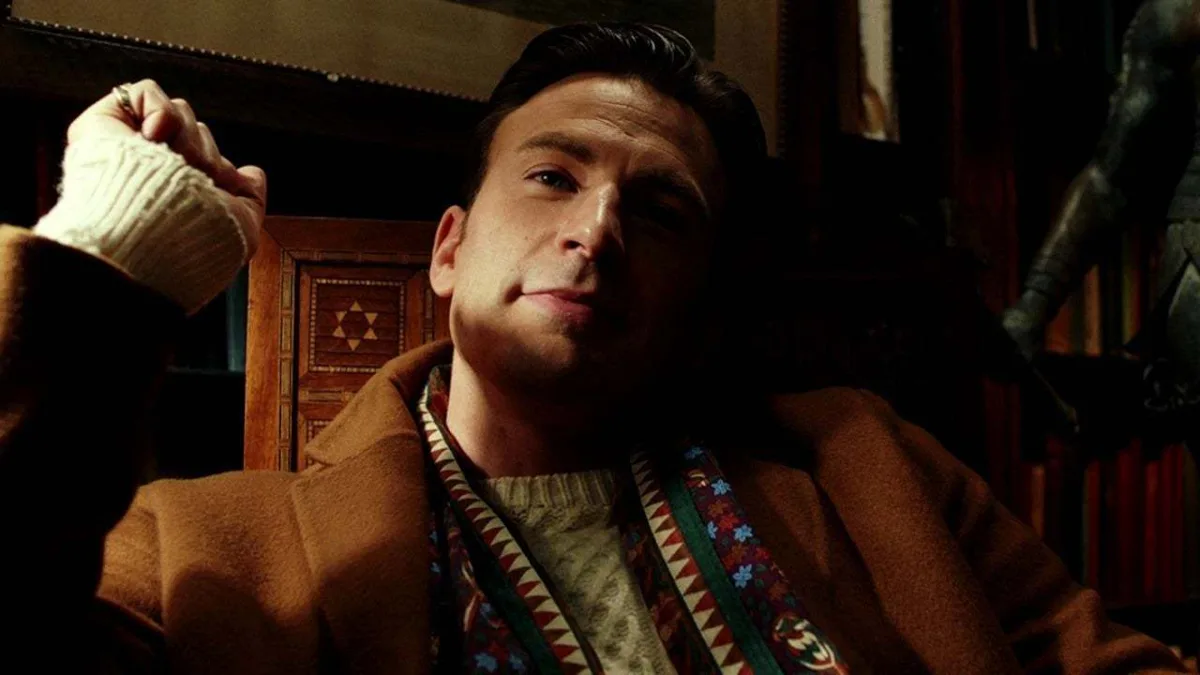 Knives Out had a pretty fair shot at Best Picture. In 2019, it was the lone movie to earn a Producers Guild Award nomination and not a corresponding Best Picture nomination. The only other award show to give it a Best Picture nomination was the Golden Globes, which did so in the Comedy/Musical category. It’s hard to wind up in Best Picture with only one other nomination. Only five films have accomplished this feat since the Best Picture field was expanded in 2009 (The Blind Side, A Serious Man, Extremely Loud & Incredibly Close, Selma, The Post). It also received acting nominations at the Golden Globes for Daniel Craig and Ana de Armas. While both performances were well liked, they always seemed on the outside of the awards conversation.

In the craft categories, Knives Out would have made an unexpected, yet delightful, costume design nominee. Costume designer Jenny Eagan won the Costume Design Guild Award for Excellence in Contemporary Films, which showed there was a chance. However, it’s notoriously hard for a contemporary film to break into costume design, which skews period or fantasy. In the history of this category in the CDG (which started in 1998), only five have earned Oscar nominations. None have won. In the 2010s alone, only La La Land was among both the CDG Contemporary lineup and the Oscar lineup. Still, it’s hard not to admire the impressive knitwear on Chris Evans. Certainly that work is more memorable than the period-specific bowling shirts in The Irishman.

Additionally, Knives Out saw nominations at the ACE Editors guild and Art Directors Guild (ADG). The ACE Comedy award usually has one film go on to Oscars (2018 had three films repeat). However, Jojo Rabbit was the only one that made it into the Oscar category. The Art Director’s Guild put Knives Out in their contemporary category, which usually face a tough time breaking into the Oscars. Only four films this decade have earned ADG Contemporary Production Design nominations and Oscar Production Design nominations (Her, The Martian, La La Land, Parasite). Though the central house in Knives Out is incredibly impressive, the Oscars will frequently default to war (1917, Jojo Rabbit) or period films (The Irishman).

How Well Does “Knives Out” Hold Up Compared to Its Fellow Nominees?

First off, Parasite is an unimpeachable winner (literally). The landmark Best Picture winner richly deserved all of its Oscar wins and more (seriously, no acting nominations and no win for Editing or Production Design). As witty and smart as Knives Out is, there’s no way it could’ve competed with Parasite.

The other three nominees were Best Picture heavyweights that had varying degrees of reliance on their script. Noah Baumbach manages to wring laughs and tears out of divorce proceedings with his fantastic Marriage Story script. While the meme-culture surrounding this film may have lambasted its earnestness and super charged emotion, there’s a level of painful truth that grounds the script.

Meanwhile, Once Upon a Time… in Hollywood boasts many of the trappings of a Quentin Tarantino flick, a two-time winner in this category. Its reverence for Hollywood and long discussions on the place of film in history recalls most of his past films. Where the script is strongest is in its surprisingly tender relationship between aging star Rick Dalton (Leonardo DiCaprio) and stuntman Cliff Booth (Brad Pitt). However, the tighter narrative of Knives Out allows the wide cast of characters to come alive more often. Comparatively, Tarantino’s revisionist history is so concerned with period nostalgia that it often meanders, losing sight of what it’s trying to say about the history it’s revising.

Finally, 1917 is an incredibly effective and thrilling war film and a worthy competitor in many races. Unfortunately, the original screenplay nomination feels most like a coattails nomination in this bunch. While the story is tight and enticing, the real storyteller of the film is cinematographer Roger Deakins. In the best possible respect, it’s more of a first person video game experience and less of a crafted theatrical story. Did it deserve its many Oscar wins and nominations? Yes. Was Sam Mendes and Krysty Wilson-Cairns script the key element that made the movie strong? No.

It’s hard not to love Knives Out. Rian Johnson crafted a thoughtful, yet entertaining, four quadrant caper. The film is endlessly re-watchable thanks to all of the levels the script operates on. While it never soars to the masterpiece level of Parasite, it certainly ranks alongside Marriage Story and Once Upon a Time… in Hollywood as a worthy nominee. Personally, I would put it third in the lineup (after Marriage Story). It would also make my personal ballot alongside Parasite, Marriage Story, The Farewell and Booksmart.

What are your thoughts on “Knives Out?” Did it deserve more Oscar nominations than it got? Let us know in the comments below.