If it ain’t broke, don’t fix it. After setting the record for most Emmy nominations for a freshman comedy (20), Ted Lasso returns with another heartwarming, edifying season that is guaranteed to put a smile on even the grumpiest person. At first glance, season two feels like more of the same, which is far from bad when you are dealing with a beloved first season that got many through the pandemic. Yet, as the season goes on it drops its guard and takes its characters to new, emotionally involving places.

While not much has changed for the show, much has changed for the central team, AFC Richmond. As season two starts, they have been stuck in a rut of endless ties in the lower level EFL Championship division. Coach Ted Lasso (Jason Sudeikis) isn’t the only inspirational force that is used to break the streak of ties. The franchise brings in a sports psychologist, Sharon (Sarah Niles), who begins to make immediate progress with a no-nonsense, more subdued approach. 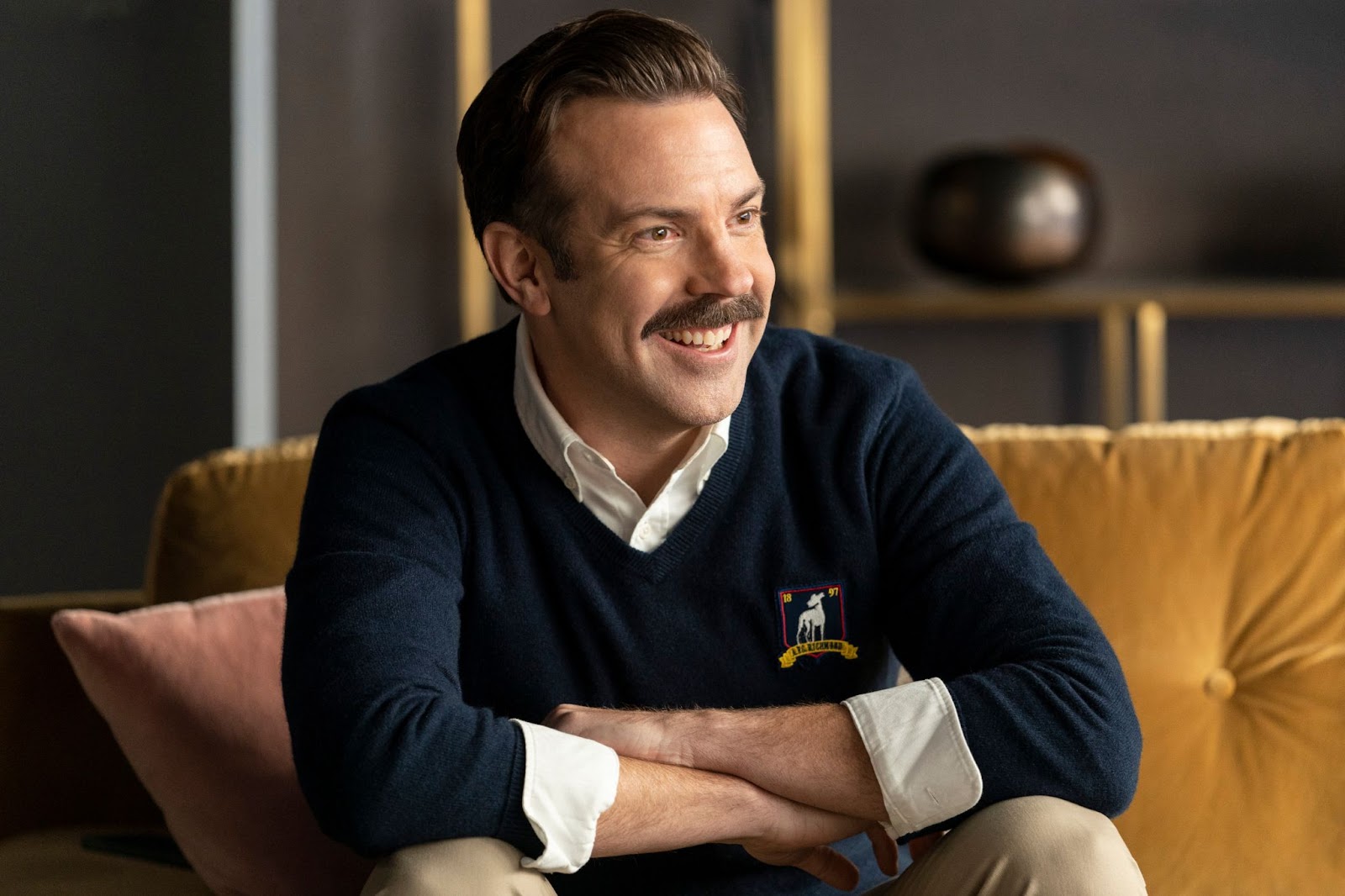 The first few episodes of season two are more of the same genial humor that the show is known for. At first, it feels like the show has settled into a comfortable, but expected rhythm. Yet, things don’t stay quiet for long, as the tensions and small cracks that were glanced over at the beginning begat bigger problems. Only once you get further into the season does one understand the subtle ambition of what it is doing with its characters. It could’ve settled into a nice-funny workplace/family comedy a la Schitt’s Creek or Parks and Recreation. Instead, Ted Lasso season two subtly deconstructs the quality that made us love our titular hero.

If season one was about the power of optimism, season two is about the limits of optimism. With the introduction of sports psychologist Sharon (Sarah Niles), Ted must contend with his feelings on therapy. Each of the players seem to be greatly helped by Sharon’s demure skills of listening and keeping a tight poker face, which spits in the face of Ted’s manic optimism. As the season develops, Sharon and Ted’s relationship as colleagues and client-patient develops in interesting and surprising ways. One of the best moments of season one was seeing the pain behind the happy smile as Ted struggles with his divorce and being away from his son. These feelings take center stage throughout season two. Jason Sudeikis once again expertly knows how to delight and devastate. He can switch from being the jovial clown to sad clown so beautifully. Ted may be an energizer bunny, but he’s also very much human. Luckily the show never forgets that.

The yin to Ted’s yang in season one was Rebecca (Hannah Waddingham), the team owner who was looking to tank the team to spite her ex-husband. Season two allows us to root for Rebecca right from the get go and Waddingham proves once again that she has star power. With the help of her trusted best friend Keeley (Juno Temple), she begins to put herself out in the dating world. Rebecca has always been defined by her strength and confidence that it was wonderful to see the show explore her sensitive side.

Rebecca isn’t the only tough cookie who gets to be softer. The “f-word” dropping curmudgeon Roy Kent (Brett Goldstein) must deal with a new post-athlete phase of his life. He spends most of his time at home reading or taking care of his adorable niece. All of these things sound wonderful, though this stasis gets on the nerves of his live-in girlfriend, Keeley. Love and a satisfied home life aren’t enough for this combustible couple. Roy struggles to find a second act to his life and that stress bleeds over into his burgeoning relationship with Keeley. Goldstein only further refined his comic timing, making each “f-bomb” and insult land in poetic fashion. 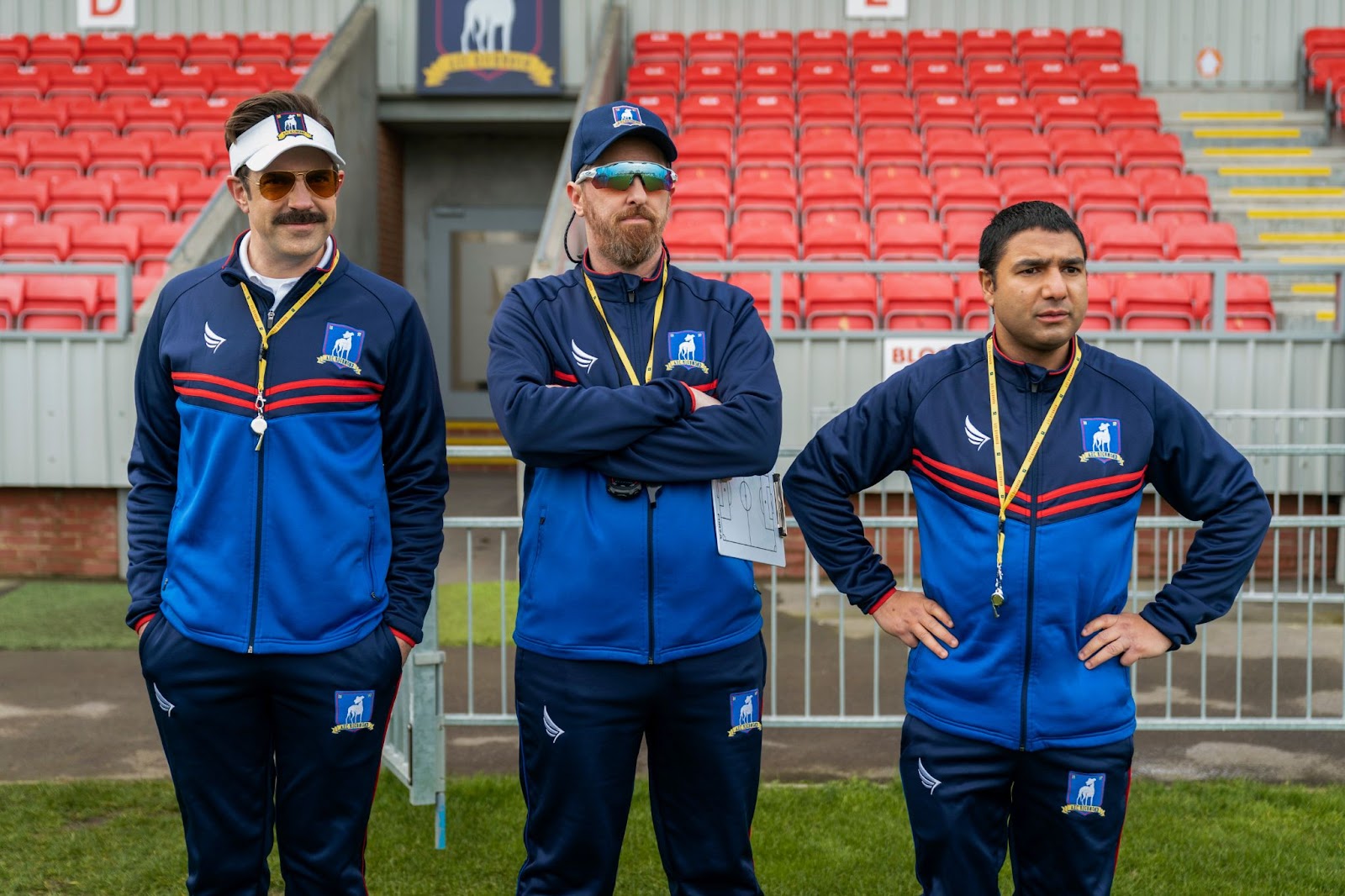 As if its seven acting nominations didn’t make this clear, Ted Lasso is about more than its ebullient titular character. Season two often takes the reins away from Ted and gives each of its supporting characters full storylines that they knock out of the park. In particular, Nick Mohammed only gets better as Nathan, a former kitman who now is part of the coaching roster. Finally in his dream job, Nathan must now reckon with the spotlight that comes with that position. It’s a great next step for a character who was a delightful side presence in season one. We also get more specific stories around some of the players, including Nigerian right back Sam Obisanya (Toheeb Jimoh) and the new star player Dani Rojas (Cristo Fernández). Everywhere you look in the locker room, the writers have found a new character or storyline to fall in love with.

In the world of Ted Lasso, people are good but they aren’t perfect. They may appear jovial on the surface, but there’s more to a person than what they display on their surface. All members of the Ted Lasso crew contain more depth than can be contained in a single episode. The first season set the stage for this lovable band of misfits and ballers. Season two allows us to spend more time with each of them and understand more about what makes them tick. The show will make you laugh and make you cry. Most importantly, just like the first season, it will make you feel immense joy.